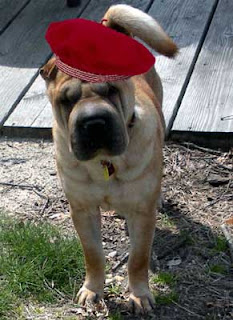 There was some interest in comments when I mentioned that French was my first language, so I thought I'd expand on that a bit today. For the first two days here in my new home no one really noticed. Most of the verbal  interaction involved expressions of delight with me, affection for me and trying to get me to eat, which I wasn't doing until they got it right. I had no problem with that kind of communication. I could get along just fine in informal conversational English - and Spanish for that matter. And of course, tone of voice and body language tells a dog a lot, too. So, no problems thus far.

I arrived on Saturday evening. On the first Monday of my new life, the Moms decided that they should take me to work with them just this one time. They didn't have a crate set up,  Daddy wasn't feeling well enough to be company that day and they didn't really know if I suffered from separation anxiety or anything. The Moms work at the same place, but they have very different jobs. Alpha Mom's seems much more interesting. She runs around to different offices and talks with all sorts of people all day and never seems to stop moving. I think she's kind of Alpha at work, too. Blog Mom mostly just stays in her office working on the computer and all that's on the screen is mostly numbers most of the time. Really not interesting to watch. So guess who I got stuck with?  Right. Blog Mom and they closed the door to her stuffy little office to boot. Something about dogs being against the rules.

After a while things got too tedious to bear, so I got up and put my front paws on the arm of Blog Mom's chair and gave her a very appealing look, complete with cocked head. She got all melty, of course, but clearly intended to keep on doing whatever she was doing, so I became teensy bit more assertive. You know - just a little nudge, nudge with the paw. At that point Blog Mom said something I didn't follow, but she seemed to expect something of me. I had no idea what and, well, I was new and all. I might even have been on some kind of probation for all I knew.  So I gave her a sincere stare that was intended to say, "I'd really like to help you out, but I have no idea what you're saying.." We went through this back and forth a couple of times and then light dawned on Blog Mom and she started Googling. After a bit she turned and said, "Sientate!", which it turns out is ""Sit" in Spanish. Blog Mom had realized that a girl from New York City might speak any one of about a gazillion languages at home. So, of course, she tried Spanish first as it's almost as common as English in the area. But that wasn't it. So she though some more and she thought that she knew a number of people from Haiti who spoke French and that they all either lived in Brooklyn or had a lot of family in Brooklyn. So she said, "Assis!". And I sat right down. A little experimenting showed that I would also obey "ici" (here, as in "come here") and I was pretty good at "attend" (stay). I do not "au pied" (heel) in any language.

Blog Mom put a list of doggy command translations on the refrigerator and everyone has tried to learn them. They've done pretty well, but the other day Blog Mom slipped and said "Sit" and I sat! She was so surprised once she realized what happened there. I am picking up English commands without even being asked to. But not "heel". Never, ever heel.
Posted by me, Lola and also Franklin, too at 9:20 PM