This was my first Passover Seder, to tell the truth. It was just as much fun as it sounded like, but the day was not without drama. Alpha Mom spent all day running around to stores and cleaning the house and doing all those things you do before having lots of company. Finally it was time for her to get herself ready and she had just gotten out of the shower, and the guests were due to start arriving in a half hour and guess what? The power went out! There'd been torrential rains and flooding and lots of people didn't have power. There didn't seem to be any reason to think this was going to be fixed right away. I should mention here that we only have electric stoves in the house.

Everyone stayed calm while Alpha Mom called the power company. After the power company lady could only repeat, over and over, that most outages would be resolved within three hours, everyone gave up being calm and opted for meltdown instead. Just a couple of minutes before the very first guests got here the power came back on and even more miraculous, stayed on. It was wonderful but the Moms might just have lost a year or so off their lives in the meantime. It's a good thing I was there to help out with the festivities. 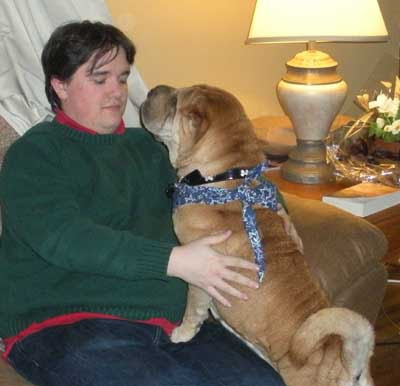 I had to see that everyone felt right at home and had everything they wanted. 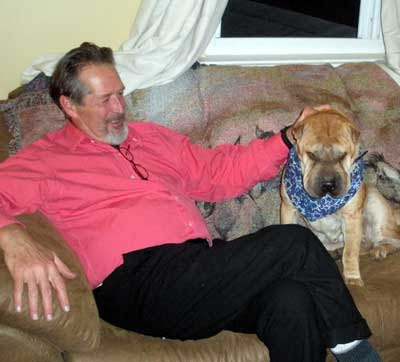 As long as what they wanted was a Shar Pei. 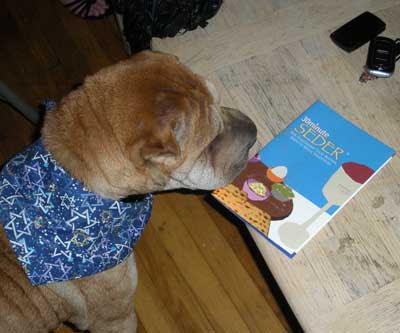 Is this holiday great, or what? It comes with its own instruction manual for the part where traditions and rituals are observed. After that, dinner is served.
The chicken was especially delicious, but nothing prepared me for CHOPPED LIVER. It's a religious experience all by itself. I was only allowed a little taste at  a time. There was concern with whether it would agree with my stomach. It seemed to and it certainly agreed with my mouth. 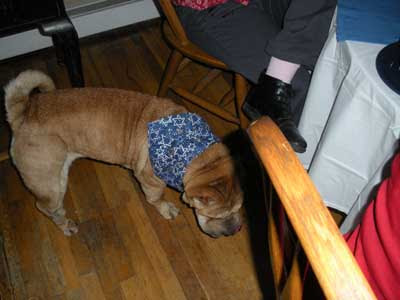 I helped with the clean-up, of course. 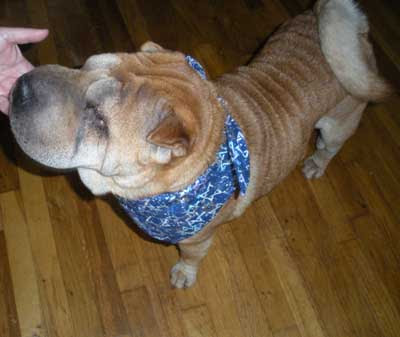 Good night, Get home safe and come back soon.
Posted by me, Lola and also Franklin, too at 9:27 PM