Well, that was just pawsome. I could not have had a better time in a roomful of cheese! As soon as we arrived at the place where the Expo was being held I was all excited. I wanted to get out, out out of the car and zoom right over to the grounds. I could smell the excitement in the air. Or at least I could smell something I liked a lot in the air. There were so many doggies to meet. It seemed like everybuddy there was accompanied by a doggy or two. We met friends we knew and friends we'd never met before. 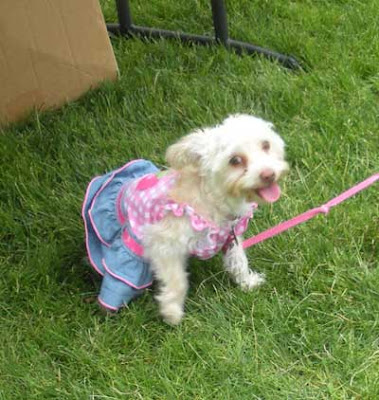 This little girl was one of the first pawple we met. I didn't catch her name, but isn't she darling? As soon as she saw Blog Mom pick up the camera she smiled and posed for us. Her own Mom didn't even know what was going on at first, which was pretty funny. Even though I don't think she's a doxie her smile kind of reminded me of Mona. 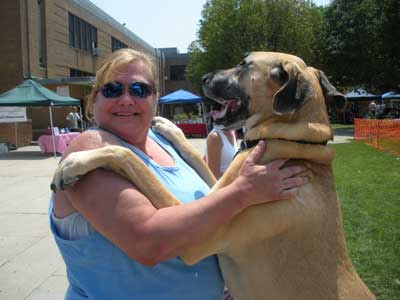 This is Nancy and CoCo. That's Nancy on the left and CoCo is the Great Dane on the right. We do know them. Actually I had never really met CoCo before but we've both been in the same building at different times and for dogs that's a lot like having met. Nancy is Alpha Office Administrator where both Moms work and also CoCo's Mommy, of course. 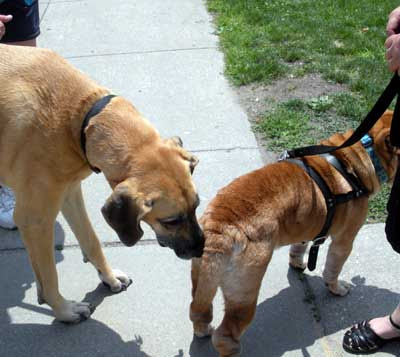 CoCo is getting to know me better there. I couldn't return the favor because I failed to bring a ladder with me. Despite my having to dispense with some of those formalities, I think we hit it off quite well. CoCo is a very gentle lady dog and I like to think I'm the same. 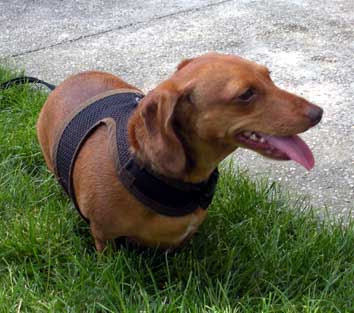 No sooner had we spent a few minutes with CoCo and her humans Chabela arrived with her Mom, Dina. Dina is a horse person like Alpha Mom and  Chabela goes down to the barn sometimes. We ended up spending quite a bit of time together and I hope we get together again soon. She is excellent company. Most pawple were very nice and as far as I could see ALL the doggies were pawfectly behaved and friendly the whole time, but there was this one weird moment. Chi (Her Mom calls Chabela "Chi" so I do, too.) was just sitting there, kind of under a table getting a little shade and this lady came over and bent down a little and looked like she was going to say how cute she is - which she certainly is. Instead the lady said, "It was a dachshund that ate my baby chicks.",  looking at poor innocent Chi as though she had something to do with it. How rude! We were all kind of dumbstruck. There are a lot of things you can say at times like that, but nobuddy thought of any in time. I just kept thinking I wished Puddles was there. I'm sure she would have told that lady off. 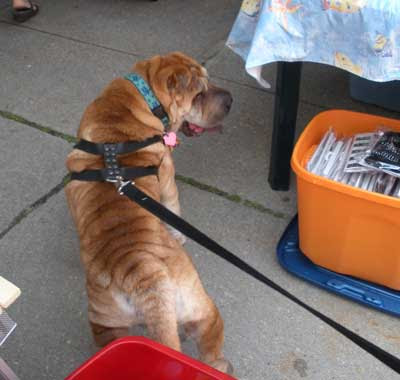 There were vendors so we did a little shopping. Actually, what happened was that Blog Mom just wanted to point something out to Alpha Mom and I wandered into the booth. Before you know it, Alpha Mom had purchased a harness for me that we didn't need and she hadn't planned on. It is very nice. It's quite dressed up looking. I'll model it for you as soon as the matching collar and leash that we also didn't need but Alpha Mom ended up ordering comes. And if I get invited to anything formal, I'll be ready. 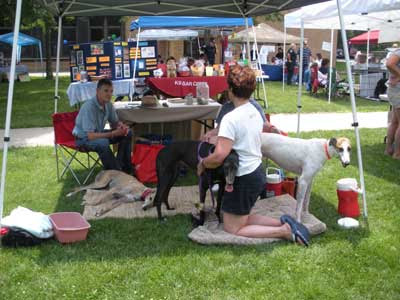 Well, you know who we thought of as soon as we saw the Grateful Greyhounds tent, don't you? Of course you do. 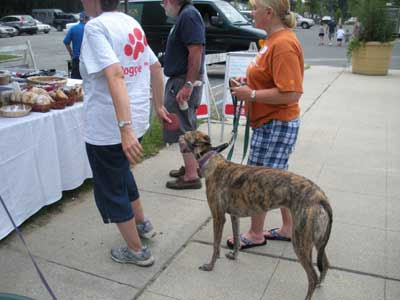 Before you knew it, it was time for a little something. I don't think that greyhound was really going to lift that lady's wallet, do you? I'm sure not!

Do I still have your attention? Because I want to tell you about something that I don't have a picture for. Then more photos, OK? We met this lady. She didn't bring her dogs with her because she was vending, but she was a Shar Pei person. She said she'd been in the breed for 20 years. When someone says they're "in the breed" you know they're serious. She was there selling doggy related jewelry, and she has a website for her Peis, too, who certified, ribboned and medalled in just about everything. And one of them is named Lola! How about that. Well, this lady said she didn't think I looked 7 years old. I mean, not just, "Oh, you don't look a day over 5, my dear." She had specific reasons. The Moms and I decided to believe her. She sure seemed to know what she was talking about. There are reasons why we were never 100% sure, which I might discuss on Frankie's Name Game day on the 4th. So now my age is no longer 7. It's officially "A lady doesn't tell her age, especially if she doesn't know it." We're kind of happy about it because Shar Pei are not known for longevity, although I believe we're improving there. So not being seven yet would be very nice. K, back to the photos now. 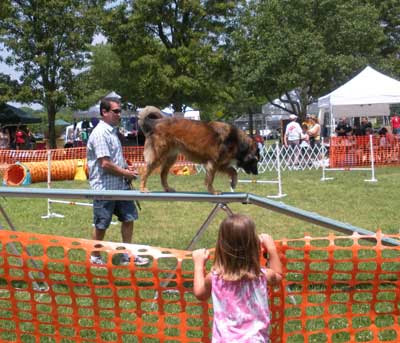 This doggy was an agility madman. He or she (furry down there) ran the course several times just pawfectly. It was quite thrilling to watch. 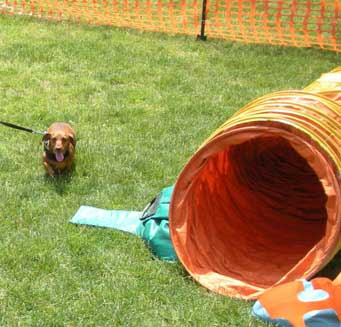 In between demonstrations by madly skilled dogs of all sorts the agility course was available for newbie dogs to try out. I really wish we'd gotten a shot of Chi going over a jump or something but she was too fast for our camera. She did great. She went over jumps and through the tire and did whatever she was asked. And she's a mini. I mean, she's rather short, you know. That didn't even slow her down. I think she probably has a future in agility. 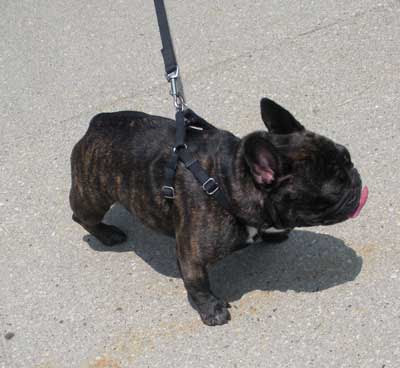 We encountered all sorts of beautiful furiends who we didn't know as we went along. Everyone was friendly. This brindle Frenchie seemed like a very mellow sort. 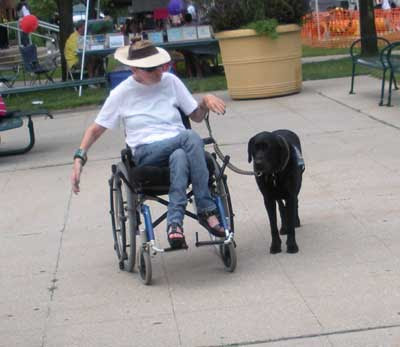 Some dogs were taking a working holiday. We knew not to bother them while they were attending to their responsibilities, of course. 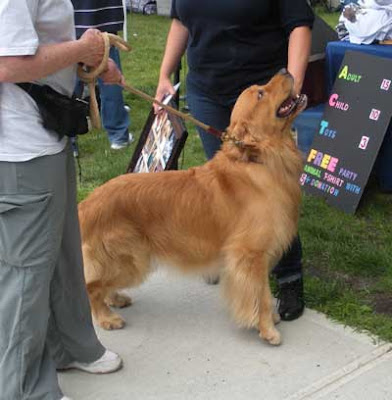 Magnificent was the only word for this Golden. The photo doesn't really show how large he is, either. Definitely an XL Golden. And he was very friendly. As if there's such a thing as a Golden who isn't. 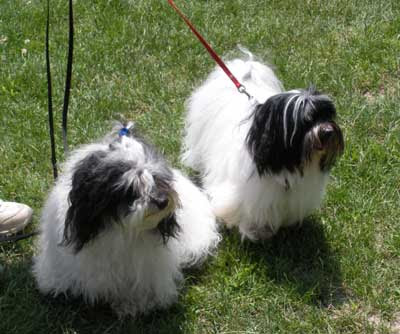 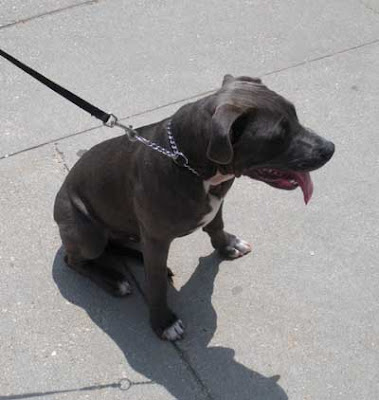 This little guy was such a gorgeous shade of pewter. I wish it had shown up better on camera. 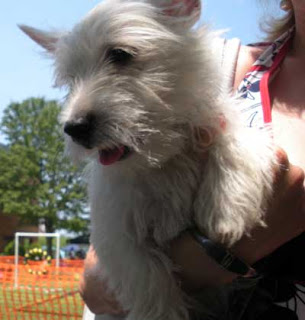 This is a Westie who we met along the way. Her owner says she's a very good dog. She looks lovely is all I know. 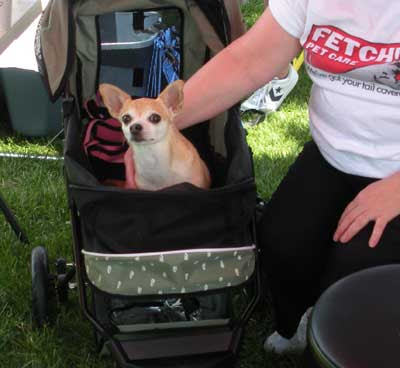 Somedogs know how to travel in real style. Way to go little fella.
Well, I can tell you  one thing. It got hot as the day went on. Really, really hot. There were water stations everywhere with big foil pans of water and hoses so they could be constantly refreshed. I would only just drink enough out of them to keep me alive. I mean strangers' germs - eeew. Fortunately, this time my own heart shaped pink water bucket was in the car. It only required someone to make a trip back to the car to get it. 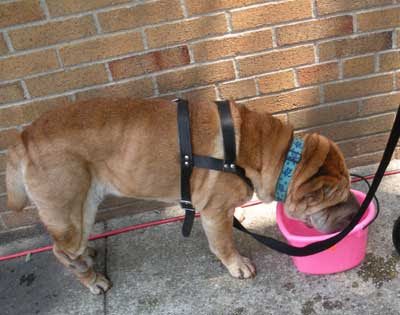 That was sooo much better. It turned out that Chi did not like to drink at at the public trough either, so I let her drink out of my bucket. Now we're saliva sisters.
I have a few more pictures to share, but I think Blogger has about had it with this post. I'll do a Part II with the rest of the photos and concluding thoughts later or tomorrow,
Posted by me, Lola and also Franklin, too at 6:01 PM