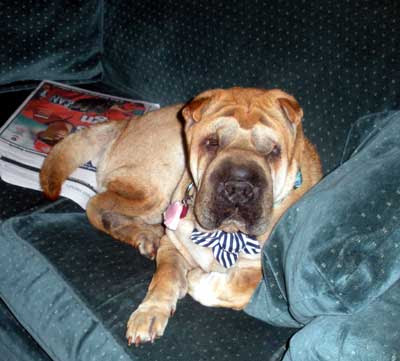 I've been doing some serious reflection and soul searching on the subject of my new little brother. I was a little startled at first, you understand. The biggest thing I was planning  to cope with last Saturday was a bath and it turned out that major life changes were in store. Plus the bath. But the fact is that I was rescued. Yes, I also rescued my humans. I rescued them from a life without me, Lola, which was simply not nearly as good as life with me. Be that as it may, I was the one living in a crate waiting for a furever home and I have been so very happy in the one I found. It would be wrong, wrong, wrong to be unwilling to Pei that forward and Brooklyn represents an opportunity to give someone else a bit of what I've got. Not to mention that giving him a home might get another doggy a little more time to find his or her forever home at the shelter. That doesn't mean  it's all peace, love and understanding every minute. And it doesn't mean I'm not going to call him Dorkface Boy from time to time, because sometimes that's what he is.

Of course there's rather a lot of distance between deciding that I should welcome the chance to make a pawsonal sacrifice and actually enjoying my little brother.We're just starting that journey. I hope it doesn't turn out to take forever. In all honesty I have to admit that he's going to be a pretty good dog if he learns a few things and gets a little more life experience. I just don't know how long that's going to take.

From the human perspective he's quite a find, like most Pei. He doesn't chew anything he's not supposed to. He doesn't think he's allowed on the furniture so he doesn't get up on it even though I do. We don't actually have that rule, but we're not telling him quite yet. He's totally housebroken.  Blog Mom was a little worried about that but charged ahead anyway. What's the matter with her? What happened was that on Saturday, while Alpha Mom and I were both getting groomed (same time, different shops) she sneaked went down to the shelter. It seems she'd been looking at the Petfinder site again and when there was a Shar Pei at the local municipal shelter she couldn't stop herself.  She got there, asked for him and he was brought out into this room they have for that kind of meeting. She wasn't worried when he went all crackadaisical, running all over, because she knew he was living in a crate and not everydog can handle that situation with the kind of poise that I did during my time in shelter. She was a tad concerned with the fact that he lifted his leg and marked in the room - indoors, pawple - every 15 seconds. Obviously, this didn't stop her and she went ahead and dragged invited Alpha Mom and me down to meet Brooklyn that same day. In fact, turns out our stop at Petco was to get him something to wear around the house in case this behavior continued at home. Not needed. Once in my our home he did not lift that leg once inside. He sits, and he even stays if you tell him just right. Not for long, but then I'm not one for the long stay myself unless I didn't want to get up anyway. He's barkier than I am, and they have mixed feelings about that. More of a guard dog, but also more of a nuisance. I don't much care either way.

That's the human angle. From the canine perspective he's a bit of a dunce. First off I had to demonstrate the purpose of a dog bed. We dragged out my old one for him to use for now. He seemed to think it was a giant stuffy.   He did pick that lesson up fairly quickly, I must admit.

He doesn't know anything about chasing squirrels or birds. Birds just walk around the yard , not even bothering to fly, when he's out there without me - and if he's out there it's without me if I have anything to say about it. I saw a squirrel just hanging out on a tree trunk not more than 3 feet from the ground with Brooklyn just standing there a couple of yards away. I think the squirrel was taunting him.

What I found out last night was that despite his constant and noisy demands that I play with him, he doesn't actually know how to do that either. He gets into play stance - you know, front down, haunches up and make all kinds of "C'mon, play with me. Let's go! Please, please, please!" noises,but he's all talk, no action. That was most clearly demonstrated in what will live forever as one of his most embarrassing  moments if I have anything to do with it. I was feeling expansive and lively after dinner so when he started I rolled over and made the appropriate noises indicating my willingness to do a little bitey face. He just stood there looking confused. But wait! It gets better. Being confused didn't stop him from starting the whole routine over again when I got up so I got in play position myself, only with haunches down and said, "OK, bring it. You want to romp? We'll romp right here in the living room."  Do you know what he did? He looked like a deer in headlights and very slowly lowered his back end onto the ground and then pretended that he just wanted to take a little rest anyway.


I think that was even funnier than the other day when I was interrupted from my morning nap by the sound of a terrifed "Yelp!!". Simone was chasing Brooklyn down the hallway and he was running as if for his life. Simone may be getting older but she's still got it. Happy's way of coping is different. He just sought higher ground until Simone schooled Brooklyn in the ways of the feline. 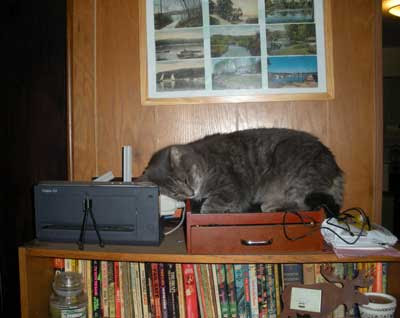 It didn't take long and Hapless is already back in his basket. Simone doesn't mess around. I don't want you to think that Brooklyn is a total wuss, though. He did take down a moose. 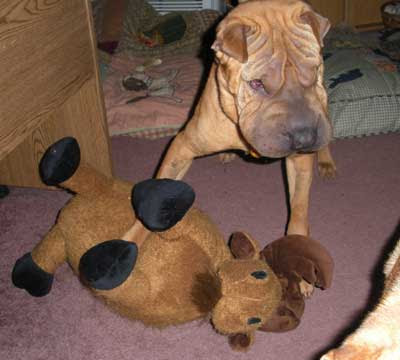 So, that's where we're at right now. It's a mitzvah to take him in and I'm OK with that. He's good raw material but needs a lot of molding and educating. And right now he's a pain in my tail.
Posted by me, Lola and also Franklin, too at 6:43 PM