Frankie's Name Game - Or How I Became Me, Lola

Today is the day to play Frankie's Name Game. First off, I guess I have to tell you that my name story is not so very fascinating. I'm mostly playing because, being a dog, sometimes I indulge in a certain pack mentality and the rest of the pack is doing it, so...well, there you go. For one thing, none of our current household pets were named by any of our current humans. In fact, Blog Mom tells me that the last pets that they got to name themselves have since passed on to the Rainbow Bridge of disorders connected with old age. The only member of our household who was named by anyone in our household is my human brother, who is 31 and he was named after Daddy. Boorrring. 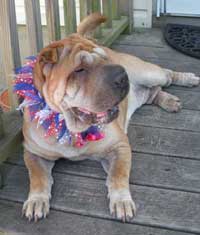 As I've mentioned before, I'm a graduate of the Sean Casey Animal Rescue in Brooklyn, NY. I got the name "Lola" while I was matriculating there. There are some connected issues that are interesting to me and my humans. I wasn't surrenderd to Sean Casey. I was surrendered to Animal Control with my puppy and Puppy Daddy. We all went to Sean Casey right after that. Sooo, all the Sean Casey people had was my Animal Control records and the name on my paper from them was "Juson". I never answered to that, though. They thought maybe they weren't pronouncing it right and maybe they weren't, being that it turned out that French was my first language and they didn't know that. But really, it's only two syllables and there are only so many ways to say it. There was this man working there who loved me a pawticular lot and would take care of me whenever he was there. Spanish was his first language and for whatever reason he thought that Lola was a good name for me. I guess I did, too, because I answered to that very quickly. When the Moms came and adopted me they thought I'd been through enough changes and didn't really consider changing my name since I seemed OK with it. They did try out the name that was on the papers, though, and once they figured out that I was a French speaking dog they tried it with the best French accent they could. Still nothing. It was like I'd never heard it before. So we stayed with Lola, which is fine by me.

The Moms think that maybe the people who surrendered me weren't my original owners at all and my name (and maybe my age) might not have been right. One of the reasons that they think this is that on the same paper with what was supposed to be my name was the information that I was in dirty condition when I was surrendered. Now let me tell you that a dirty Pei is an uncared for Pei. We need our ears cleaned and also we tend to have skin issues. I know I do. If I'd been neglected for most of my life I would have been a mess by the time I got to rescue. As it was, all I really needed was a bath (ugh). As my new humans got to know me they had to conclude that I'd spent most of my life being well cared for. I was affectionate, friendly, confidant and  optimistic. I wasn't fearful or defensive at all. I seemed very familiar with all manner of creature comforts. I was very well behaved and socialized. Once the language barrier was cleared up it was apparent that I was trained, too, at least in basic commands. Sooo...what happened there? I guess we'll never know for sure, but it is the subject of a fair amount of speculation around the house.

Now I'm going to stay out of the heat and just read everydog's entry in the Name Game for awhile.
Posted by me, Lola and also Franklin, too at 9:53 AM