A Blog for me, Lola! 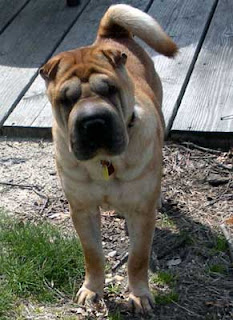 Hi! It's me, Lola.  Blogging Mom (I have two Moms and a Daddy, but it's not what you're thinking.)  and I have been working on setting this blog up for quite some time.  After getting it pretty much the way we wanted it, Blogging Mom was just getting to the part where we write out a sort of formal introduction telling all about how I came to live with my humans and other biographical details. But just before we did that she said, "Oh, look! Blogger has a  new Template Designer thingy. Let's try that out before we go live."  I finally had to put my paw down and tell her to stop being distracted with the shiny objects. I'm seven years old - or so they say - I don't feel or look a day over five. But the point is that I'm not getting any younger and, believe me, neither is Blogging Mom. Let's do this while we still can. Blog now, tweak later.

So, on with the introduction - short version. I'm a Chinese Shar Pei, now living on Long Island. I've been living with my humans for not quite a year now.  We can't be sure of my birthday because my papers seem to have been lost in someone's haste to surrender me to NYC Animal Control,  so we'll be celebrating our first Lolaversary together on April 4th.  My place of residence when we all met was the Sean Casey Animal Rescue in Brooklyn, NY. More about that when we get around to the full bio, but suffice to say it's worked out beautifully, especially for the humans. I'm very happy, too, of course. For one thing, they're crazy about me. It's hard to be dissatisfied with constant adoration.

Blogging Mom and I got interested in this project after noticing that quite a lot of dogs were doing some marvelous blogging. One of my particular favorites is by Hero, a Shar Pei in Malaysia. In my mind he's kind of the Indiana Jones of Shar Pei. He has such amazing adventures and no fear as far as I can see. He hikes up mountains, walks over teeny tiny bridges, boats, swims and all without any stress reaction at all. He's also pretty easy on the eyes, if you know what I mean.

Another favorite blogus canis is by Wimsey. He's also handsome, in a totally different way. Well, a Bloodhound way, to be exact. He's no Shar Pei, but he's got his own special wrinkles. Wimsey lives on the Upper West Side of Manhattan. That's where Alpha Mom and Blogging Mom come from originally, so he's created a lot of interest around here. By the way, Wimsey was attacked and injured this past week. He seems to be recovering well, but it was a terrible thing to have happen. He may be sardonic, but that's not a reason for an assault.

Now I don't live the adventurous life that Hero does. Nor am I a hip, urban show dog like Wimsey. Well, I used to be urban, ergo hip, but now I'm all suburban.  Still, I think that each dog has his or her own contribution to make and here I hope to make mine.