A Home for me, Lola!

After the Moms decided that they wanted to take me, Lola, home there was still quite  a lot to do before we could be on our way. There were references to be checked. Lots of them. I was put in the holding cell - a crate in the Hamilton Doghouse, which is the pet supply shop connected to the Sean Casey Animal Rescue.

I sat quietly, waiting to see what would happen next. The Moms use their time productively, purchasing a leash and collar and some chew toys and less productively, buying a humongous bag of the healthy kibble I'd been fed at the shelter. I guess they didn't realize that I was thinking to myself, "If this works out, as Dog is my witness, I'll never eat kibble again!"

When we were free to go  there were still good-byes to be said. My mustached friend was there and we needed a few minutes. He got a bit leaky, but he was happy for me, too. He told the Moms that they'd made the best possible choice. Then, after a little walk we piled into the car. At that point I got a rare case of nerves, so I threw up on the back seat. It was quite theraputic. I felt much better after that. We drove for what seemed like a very long time. We drove right out of Brooklyn! 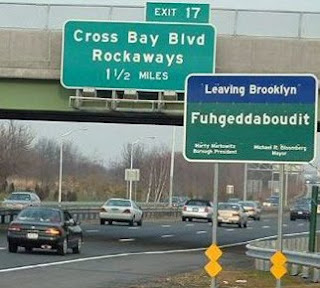 Well, this certainly seemed to be for real. Time to start bonding! I moved up between the front seats and offered prodigious licks to both Moms. That was well received so I pretty much kept it up the rest of the way home. Those were two damp Moms by the time we got fifty miles out on Long Island. I helped to drive, too. Do you know it turns out that putting the car in neutral while moving on the Belt Parkway is not such a good thing? Well, it's not! I'm sure because I did it several times and it seemed to cause some alarm each time.

We finally arrived at the end of the earth my new home. It was dark by the time we got there. Of course,  tired as we all were, I still had to start learning about the household right away. Blog Mom and Daddy live downstairs and Alpha Mom lives in her own separate apartment upstairs. I sleep upstairs with her, but I live in both places. I'm the upstairs/downstairs dog. Keeps me busy. There were three cats, none of whom seemed overwhelmed with joy to meet me.

I sniffed around  to get the lay of the land. A lot of animals and humans have passed through this house. I can tell you that for sure. Something appeared to be missing, but then the Moms produced a dog bed and everything fell into place. Especially me. 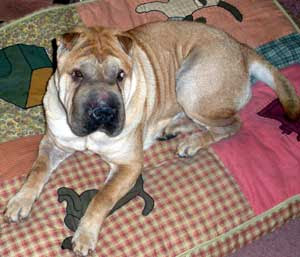 Daddy was nice but not well. He's got something wrong where he'll be in pain and hardly able to walk for days at a time. When that's going on he doesn't even want to eat and he stays in bed or lies on the couch and tries to sleep as much as he can. Then he'll be OK for a few days. I think it must be similar to Swollen Hock Syndrome. Well, he wasn't feeling well at all that night, or for a few days afterward so it took a little longer for us to really get to know each other but better late than never. He says I'm the best dog he ever met. Before I moved in he really wanted a Golden Retriever. The Moms realized that a Golden wouldn't be practical given the facts and circumstances of their lives, but Daddy was stuck on the idea. Now he never, ever mentions wanting any dog other than me, Lola.

There are two other young human adult males who weren't home that first evening. There's Rob, who is Blog Mom and Daddy's adult offspring. Then there's a bass player who was without a home and I guess my humans are fostering him until he finds a forever home. They both come and go a lot, but Rob's home more than he used to be, which is a good thing. It might be because of me. All I'm saying is that Rob was a touring musician for most of a decade. I move in and after a few months he wants off the road. Just connecting the dots is all. They're both quite pleasant and when they're around I try to take them for walks as often as I can.

And that's the end of the happy ending and the beginning of a wonderful life. Humans like to say that when one doggy door closes another opens. I wish it was always true for everydog, but it's certainly been true for me, Lola.
Posted by me, Lola and also Franklin, too at 11:16 PM

Labels: About Lola, Animal Rescue, Family, Sick as a dog